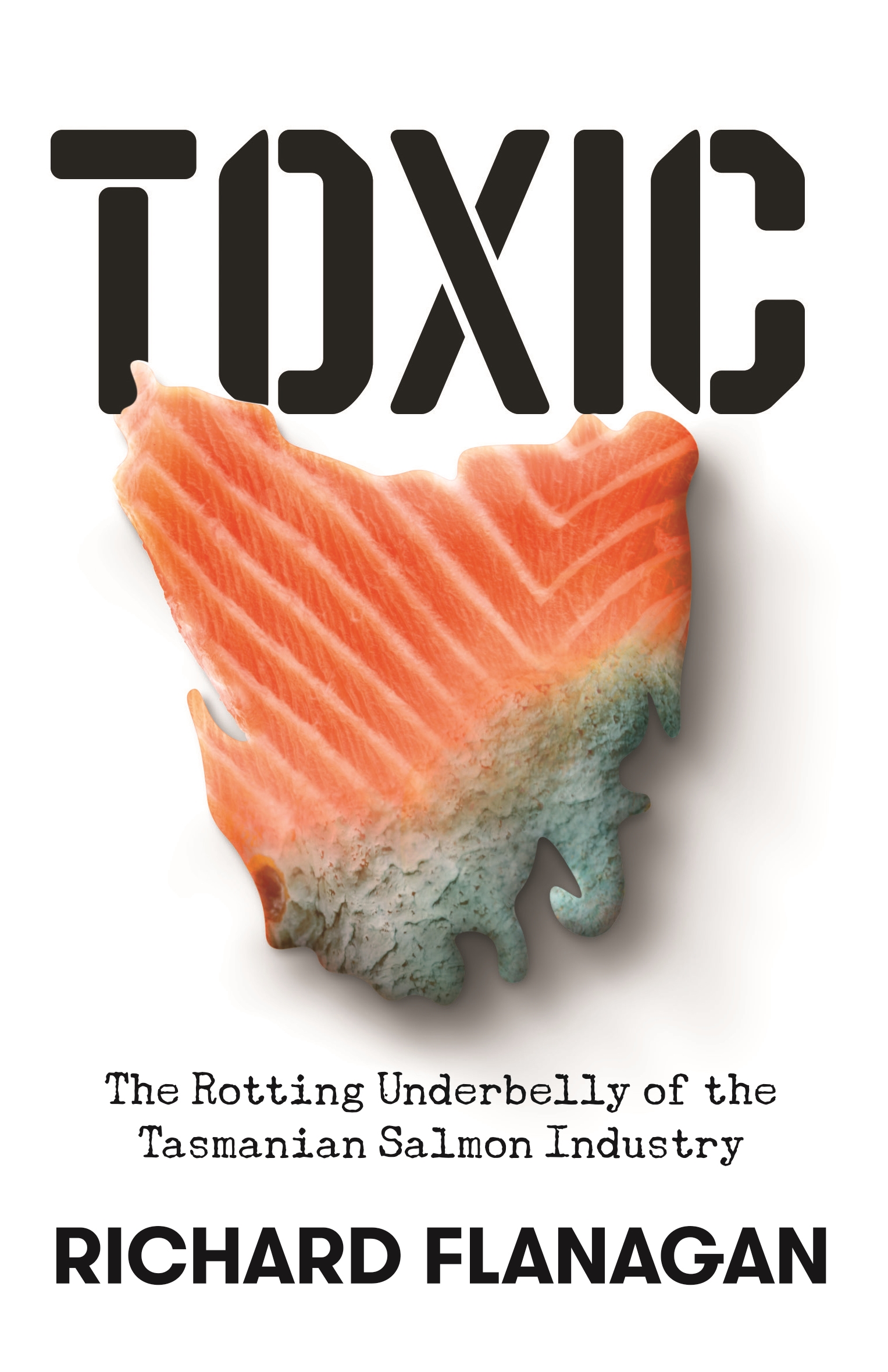 Toxic: The Rotting Underbelly of the Tasmanian Salmon Industry

The title “Toxic” and the cover art of Richard Flanagan’s most recent book are harbingers of a grubby expose. I did not, however, expect the full extent of the horror show that is the Tasmanian Atlantic salmon industry.

As someone who obtains the majority of their protein from fish, especially salmon, and someone who believed they were making a healthy choice buying Atlantic salmon, this was shocking.

Companies running Salmon hatcheries (where salmon are bred and raised to juvenile stage) draw fresh water from the (once) pristine environments of the Derwent and Huon river systems and pump their filthy effluent (think dissolved ammonia, nitrates and phosphorous, decayed faeces and food) straight back into these rivers, polluting Hobart’s drinking water.

Overstocking fish feed lots (common practice by the major Tasmanian salmon producer) breaches pollution thresholds and turns them into incubators of disease. The solution – antibiotics, despite the WHO recommending that antibiotics should not be routinely used in animal farming.

What do farmed fish eat? This one really made my stomach turn. The feed of choice is fish meal bought from overseas suppliers (with disastrous environmental impacts on countries that strip their oceans of anchovies and other small fish to manufacture fish meal). Fish meal and fish oil needs to be stabilised with chemicals for transport to avoid them going rancid. Enter ethoxyquin – a petroleum derived chemical stabilised developed by Monsanto as a pesticide. Ethoxyquin is banned for use in human food (but not in fish food).

Fish meal can be expensive so another source of food is derived from chicken farming and here Flanagan does not mince his words “…prepared from the carcasses of slaughtered poultry…macerated brains, ground up feathers, mashed-up beaks, claws and guts of battery hens.” They are also fed soy products and the story there is another one of horror, destruction and deforestation.

Salmon in their natural habitat are pink because they feed on small crustaceans. Industrial farmed salmon has grey flesh. It turns out consumers are none too keen on grey flaccid looking salmon fillets so the solution is to dye the fish with a synthetic dye mixed in with their food. The dyes even come with a colour swatch card.

Seals, who love to eat salmon, are a pest to big salmon companies so salmon farmers fire seal bombs (bags of lead pellets) at seals which can blind and maim them.

The litany of destruction goes on.

As always, with anything by Flanangan, the book is erudite and compelling. It is clearly thoroughly researched and heart felt.

As stomach-turning as Toxic was to read, thank you for bringing this to our attention Mr Flanagan.

Click on the link below to buy your copy of “Toxic” and support Vibrant Lives Podcast (as an Amazon Affiliate).

I love recommending books that I’ve enjoyed reading and learnt from. If you think you’d love this book too, follow the link and any purchase will help support the podcast.

Listen for free and follow for the latest episodes

Fear of missing out? Have my latest news, discoveries, recommendations, episodes and more delivered straight to your inbox, once a month, no fuss. Simply subscribe below:

ALWAYS WAS, ALWAYS WILL BE

We recognise and pay our deepest respect to the traditional custodians of the land and acknowledge their rich heritage and deep insights from which we can all learn.

Fear of missing out? Have my latest news, discoveries, recommendations, episodes and more delivered straight to your inbox, once a month, no fuss.